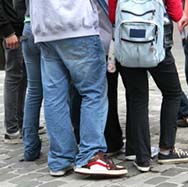 Broome County, New York is known statewide for its strong collaboration across organizations and sectors. In particular, schools and community agencies have been working together for many years to address the needs of low-income children, families, older adults and communities. When Binghamton University created the College of Community and Public Affairs in 2006, it became an important partner in securing funding for this work. Initial grants were small (e.g., $5K) and from the local community, but after collecting and analyzing data showing the impact of their efforts, the collaborative received a large multi-year federal grant. When that grant ended, the partners scanned the state policy environment and secured state dollars to sustain and add to the foundation they had built.

Building on the collaborative efforts that started in the 1980s when Binghamton and surrounding Broome County experienced an economic downturn, in 2006, faculty from Binghamton University’s schools of social work, nursing and education began to work together and with community organizations to assess the challenges facing low-income families and children in the community. This assessment led to an understanding of both the available resources and any gaps in existing services. Based on this knowledge, an inter-disciplinary team of Binghamton faculty and graduate students designed and implemented programs and interventions in local elementary schools to respond to these gaps in a holistic way. Using initial data about the improvements that were achieved as well as the challenge of providing these services, the faculty group worked with a team led by the Broome-Tioga BOCES (New York State authorized intermediate school districts or Board of Cooperative Education Services) to secure support in the final round of community-awarded Federal Safe Schools/Healthy Students grants.

The Safe Schools/Healthy Students (SS/HS) award enabled the team to develop, implement and evaluate a county-wide effort to remove barriers to educational success. In addition to individual student gains over the four-year period, significant gains were made by the county’s thirteen school districts, as they worked collaboratively to solve problems, share solutions and respond to cross-county challenges. When the Safe Schools/Healthy Students funding ended in 2013, all partners expressed a commitment to maintaining and building on these gains.

A consultant was hired to examine state funding initiatives as a means to continue the work. She identified New York State’s Promise Zones, geared to bridge schools and mental health, as a possible vehicle for maintaining the interdisciplinary gains made thus far, and for taking the collaborative work to the next level of building a school-community infrastructure that promotes child development and family support. The team decided to apply to be the state’s fifth Promise Zone and put together a presentation that illustrated why the state should invest in Broome County.

The event at which SS/HS partners made their presentation to state Promise Zone officials had a number of components that made it successful. First, the county’s important “players” were part of the team; these included the community’s state Assemblywoman who also chaired the Assembly’s subcommittee on Children and Families, Binghamton University’s President, Superintendents, the CEO of the local hospital, and Executive Directors of local foundations.

A second success-oriented component was that the presentation integrated the Governor’s goals and those of the Promise Zone with the county’s goals. The Governor’s Education Reform Commission had just come out with a recommendation to build community schools across the state. The centerpiece of the Broome County Promise Zone proposal was that support would be used to build a county-wide system of community schools. In addition, one of the state’s goals was to build relationships with the State University of New York (SUNY); Broome County’s proposal included the local SUNY campus, Binghamton University, as a primary partner. The team also argued that the Promise Zone had been successful in large cities in the state (New York City, Syracuse and Buffalo), and Broome County could build on that success and adapt it for a county-wide effort that included smaller cities, towns and rural areas.

A few months after the presentation, the team received a call from the state that Broome would receive funding and be designated the state’s fifth Promise Zone.

Since that time in 2013, Broome County Department of Mental Health, Broome-Tioga BOCES and Binghamton University’s Institute for Multigenerational Studies’ Center for Family School and Community Partnerships have been developing, implementing and evaluating a county-wide system of university-assisted community schools. Binghamton University’s Division of Student Affairs has identified this work as its signature civic engagement effort and, in just two years, hundreds of undergraduate and graduate students have held internships with the Promise Zone, spanning all schools and colleges at the university (nursing, social work, education, engineering, philosophy, business, etc.). Local foundations, individuals and school districts have added money to the state allocation to expand its reach. The goal is to work collaboratively to “level the playing field” for the 55% of children in Broome County from low-income families, giving them the same chance for success as their middle class counterparts and, while doing so, to improve economic development in the region.